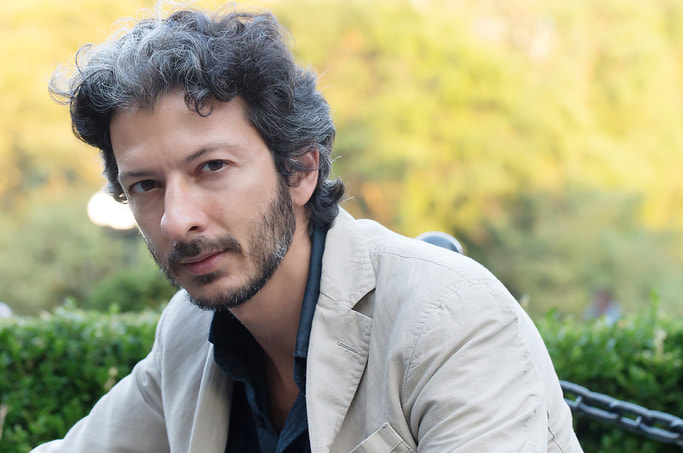 "...such speed, agility, range of motion both spatially and dynamically—stamina and to spare. It felt as though I was listening to a reincarnation of Liszt in this 80 minute improvisation." (Nancy Garniez, pianist)
​
​Ramin Amir Arjomand is an Iranian American composer, pianist, improviser, conductor, and educator based in Brooklyn, New York. His composition teachers include Gheorghe Costinescu, Fred Lerdahl, Jonathan Kramer, and Tristan Murail. His music has been presented by Speculum Musicae, So Percussion Ensemble, the New York Virtuoso Singers, the Cassatt Quartet, TAK Ensemble, the Columbia Collegium Musicum, and numerous independent ensembles and soloists in venues throughout the United States, Europe, the Middle East, and Asia.
​
​As a pianist whose long-form solo improvisational playing has been reviewed as "grand, tectonic, torrential as the forces of nature unleashed, yet fully under control" (Nader Ardalan, architect), Arjomand has performed widely as a soloist and in ensembles presenting his own works. His approach cultivates spontaneity and thrives on questioning the need for pre-conceived formal structures in composition and performance. In recent appearances, his activity has focused on total improvisation. His electroacoustic music, based in a Logic digital editing environment, works primarily with recorded improvised sound material. In 2017, his work Madrigal 040117 was presented at the International Computer Music Conference in Shanghai.

From 1999-2001, while a doctoral fellow at Columbia University, Arjomand was the director and conductor of the University's early music choir, Collegium Musicum. During this time he began to research the polyphonic technique of 15th century Flemish composers, whose music became the main focus of his concert repertoire with the Collegium. His doctoral dissertation essay, "On Contrapuntal Practice", is based largely on his research into this music. His interest in vocal music and in speech as music has led to a wide variety of concert, electroacoustic and music theater works that experiment with the human voice in different ways. In 2007, his work Alma Redemptoris mater for 12-part a cappella choir was awarded First Prize in the New York Virtuoso Singers Choral Composition Competition and was premiered in New York City with Harold Rosenbaum conducting.

Arjomand has worked extensively as a composer, pianist, lecturer, and musical adviser with the Barnard College Department of Dance. His approach to dance theater composition emphasizes contrapuntal relationships between sound and movement. He has worked to develop collaborative models in which composer and choreographer can trust one another to work freely and independently toward a common goal. In 2004, his collaboration with choreographer Laveen Naidu, Like arrows in the hand of a warrior, daybreak, was commissioned by the Barnard Dance Department and presented in Miller Theatre in New York City.